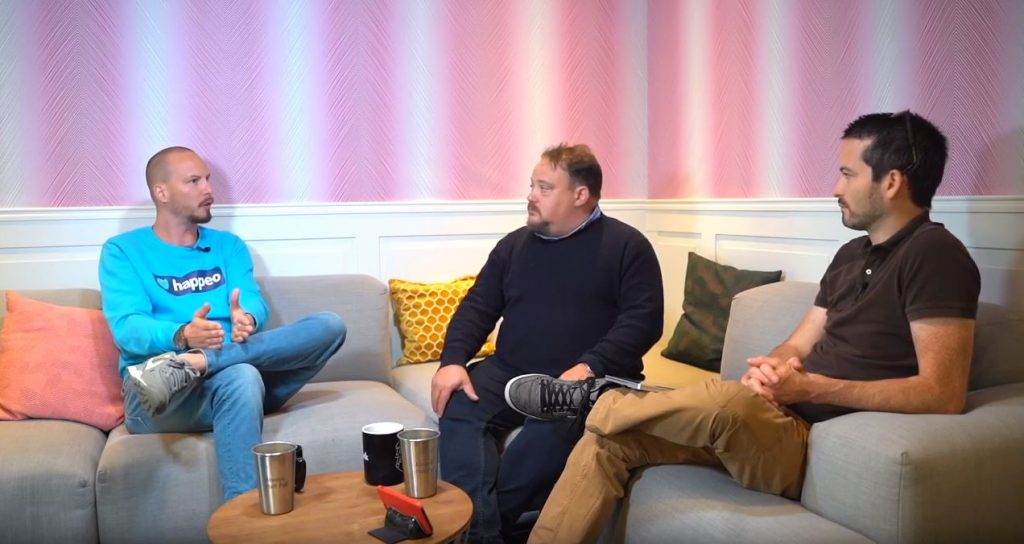 In the latest blog from Damson Cloud, we sit down with Happeo’s Jonathan Davies and Changing the Term’s Mike Klein for an informal discussion on internal communications and the Happeo product. Both participants hold considerable industry experience in the field of internal communications, and we were delighted to hear their insights this week.

With over 20 years of industry experience, Mike Klein has worked across leading companies including EasyJet, Shell, Vodafone and Barclays. Now Principal of Changing the Terms, the internal communications expert is a former chair of the EMENA region for the International Association of Business Communicators (IABC). Meanwhile, Jonathan Davies is a Happeo journalist with an extensive background in digital content and branding, now running Happeo’s successful Internal Communications Podcast.

Falling into the Field

Jumping into the discussion, we begin the conversation with a chat about how Klein and Davies got into the field of internal comms. For Jonathan, entering the industry was something that he naturally ‘fell into’ – a process aided and abetted by his partner’s master thesis in internal communications, which he edited as a native English speaker. In a previous role Davies produced content with a focus on internal branding, which encouraged him to move into his current role: “I’ve been in tech ever since, and I feel that the stories about people in tech are just a little bit more interesting”.

The Happeo journalist talks of the changes he experienced when moving to the tech industry. “Things were a lot more progressive – including the attitude at the company. You also get more focus on the details. Because this is centric to developers, who are very detail-orientated in their work – that culture spills out into the rest of the company,” he shares. “That culture made me a better journalist, essentially.”

Like Davies, Mike Klein also “stumbled” into the field of internal comms. Before moving into the industry, Klein was a Political Campaign Consultant, handling campaigns and political affairs in Washington. Since making the move, Klein has also been in internal comms ever since.

A Shifting Culture in Internal Comms

Moving onto the next segment of our discussion, we spoke about the importance of company culture and what shifts, if any, have been experienced in internal comms. Klein envisages the concept of company culture as “a combination of what a company says it is, what it says its principles and values are and how much pressure it puts on people to maintain that gap.” Whilst Klein admits that such a description is quite negative, he insists that it is, nonetheless, actionable. “Once you realise what’s actually going on, then you can address the gap and create a more authentic and positive culture,” he argues.

Meanwhile, Davies points to a recent study on company culture which highlighted ‘motivation’ as being closely linked to how much employees feel ‘aligned’ to their company’s culture. “Internal Communications is all about creating alignment. The same study found that feeling part of a company culture could increase revenue by up to 30 percent,” says Davies, “so, internal comms has a significant role to play – and it’s not the type of thing you’d always find on a balance sheet.”

The Challenge in Measuring ‘Soft Skills’

Companies are increasingly looking beyond experience and qualifications to qualities that were once described as ‘soft skills’ – skills in communication, for example. Whilst these skills are important, measuring their benefits represents a difficult task. “The paradox is that these skills are extremely important. However, they are difficult to measure and therefore difficult to action,” says Klein. “Some of the research recently commissioned by Happeo focuses on how we can actually measure these skills.”

Discussing the research in detail, Klein shares insights into his research work so far. Interviewing dozens of communications professionals across the world, his research has been aimed at assessing where communications is going and the challenges it continues to face. “How could we meaningfully address what these professionals want from us?” asks Klein. According to the expert, the findings of the research may play a significant role in transforming perceptions of the industry as a whole.

Reflecting on his background, Davies highlights that businesses continue to face issues around measuring the impact of their marketing efforts. “In marketing, we can actually measure the impact of advertisements and campaigns. Internal comms, unfortunately, hasn’t gone through that revolution yet. We are aiming to change how they operate,” he claims.

Klein returns to the subject of Happeo’s role in challenging the internal communications industry. “Internal comms really needed somebody to come and show them a better way to do it, and it’s not just about having a better tool – it’s about creating a better environment for internal communications to operate. There is a huge trend now where the lines between internal and external comms are blurred. When you create this space, it increases the pressure and speed at which things happen, which requires a different set of skills.”

Both experts agree that when it comes to cultural change or digital transformation, “it’s more than just a tool”. In essence, both suggest that there are a multitude of factors that must be considered, rather than focussing on a mere change of technology. Davies suggests that the adoption rate is one of the biggest factors than companies must address. “Always ask your vendor very critical about their adoption rate. As them what their design process is like. It needs to be accessible to developers and end-users,” he advises.

Klein agrees that transformation is about more than simply ‘changing tools’: “From my perspective, the key thing is to hold a level of ownership. If that ownership has confidence in the tool and their own role as a leader in that organisation – if you are pushing the platform, you need to have your own sense of having a mission in the grand scheme of things”.

The Black Elephant in the Room

In the next segment of the discussion, we move onto the question of top company positions and their visibility to the wider workforce and the general public. According to Mike Klein, that question is inextricably linked to that of cost. “The irony is that companies can be more relaxed about costs than huge communicators. For example, a few hundred thousand for a piece of software across a multi-billion dollar organisation doesn’t pale in the grand scheme of things. That really ties into ownership as well,” he shares. According to the researcher, this question represents “the black elephant in the room”.

“I’ve always found internal comms to be a natural fit for HR. I’ve spoken to HR directors and all of them said their main concern was building an HR analytics dashboard that is mature enough to give them an overview of everything they need. I see comms as fitting onto that very well, as it can be measured and tracked,” adds Davies. Klein, however, cautions that such tools drive “one size fits all” thinking – a culture to be avoided in the field of internal comms.

In conclusion, Davies poses a pertinent question: “Are we plugging holes in a boat, or are we making sure that boat never sinks again?”

As a longstanding member of the Google Cloud Partner program, Damson Cloud specialise in bringing people and ideas together through new ways of working. We champion change management and digital transformation using some of the internet’s most trusted solutions, including Google Workspace (formerly G Suite), Happeo and Jamboard. To find out more about our services, check out our library of tutorial videos or our blog.

Google Drive: How To Use Targeted File Sharing

Google Workspace: What is the New Frontline Worker Plan?