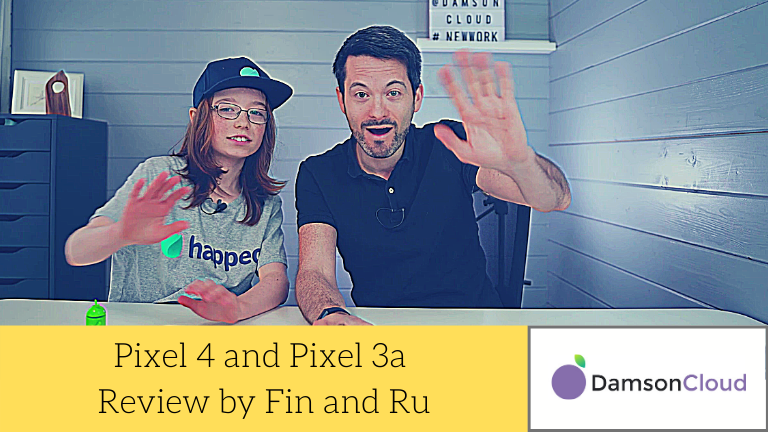 Pixel 4 and Pixel 3a Review by Fin and Ru

You asked, we delivered! The response to our special guest star a few weeks back was amazing. So, we found some more awesome tech to review together. This week, Fintan and Ruairí return by popular demand to take on the Google Pixel Phones, comparing the new Pixel 4 to the Google Pixel 3a, the differences between Apple and Android and some of the challenges you can expect when switching.

We are big into our gadgets here at Damson Cloud – whether its Apple or Google, we are fans of both and have been iPhone users since the first one came out.  However, both myself and Ruairí recently switched from iPhones (a 6 and 8 respectively) to Android 3a and 4. We thought it might be valuable to our followers if we compared these two phones, discussing our likes and dislikes as well as highlighting some of the challenges we found when switching from Apple to Android as a system.

First off, let’s talk about some of the positives of both phones. Ruairí is a big fan of the fingerprint ID, which can be used to easily unlock the phone. He found this to be a lot easier than his previous iPhone 6. The fingerprint scanner is based at the back of the phone by the camera lens, making the unlocking process just about as simple as it gets.

I, on the other hand, am a huge fan of the camera! In fact, I think it is one of the best cameras I have seen on a smartphone. I am a big photography enthusiast and videographer. I have found that I do not take my DSLR with me as much as I used to because I feel that the phone can take such incredible photos. It’s also worth noting that Pixel comes with a smaller price tag – and its camera offers serious competition. Here are some examples of awesome photos I’ve taken!

We are both big fans of the widgets Google Assistant and Voice to Text.  The widgets feature allows customization of your home screen and the adding of common apps with control or information surfacing on it. Overall, we’ve found that Google Assistant is actually better than Siri – plus, the Voice to Text feature is super accurate.

Google Assistant on the phone can show you your calendar, add appointments and answer questions. This is really handy when you’re driving or busy doing other tasks!

Here’s a link to the tech specs. Check them out yourselves!

Being on the latest version of Android can be a bit frustrating as sometimes you can get more issues with it being less stable than iOS. Losing iMessage is frustrating when you move over, and not being able to migrate any of your data within Whatsapp is really annoying. However, after a few weeks you forget about it and move on. Not having Facetime was annoying at the start, but I have moved to Google Duo now and most people I call are also on Duo. Ruairí is a huge fan of Whatsapp, so he hasn’t had to worry too much.

We have found the keyboard on the Pixel not as user friendly as iOS – although we do accept that this choice can often depend on the size of your fingers! However, since doing the video, my colleague James Kimbley pointed out that you can install additional keyboards and recommended Swift Keyboard. On the other hand, we found that the cursor wasn’t just as easy to use on Android – and the point and click process just isn’t as simple as with the iPhone.

Next, we cover cases and go through several cases that we got for our phones. Our advice here is NOT to buy the Google Pixel case as it is really slippy and actually fairly useless.  The two ones we have used and love are the BARE case and MOUS cases – we recommend having a look at these stylish & practical cases before deciding to buy. The Bare case is super light, but doesn’t offer a huge amount of protection. Meanwhile, MOUS cases are quite heavy, offering robust protection for your phone. It came with an added screen protector, and is even safe to drop from a 1 metre distance.

The final verdict according to Ruairí? Android is the undisputed winner!

Here at Damson Cloud, we’re passionate about changing the way we work using the latest technology and tools. We’ve been privileged to work with some of the best solutions in digital transformation, and we’ve been lucky to get some top insights along the way from some of the industry’s foremost leaders including SheetGo’s Yannick Rault, Online Partner Sweden’s Fredrik Linnander and Happeo’s Perttu Ojansuu. Take a look at some of our interviews and don’t forget to like, subscribe and share!

As a longstanding member of the Google Cloud Partner program, Damson Cloud specialise in bringing people and ideas together through new ways of working. We champion change management and digital transformation using some of the internet’s most trusted solutions, including Google Workspace (formerly G Suite), Happeo and Jamboard. To find out more about our services, check out our library of tutorial videos or our blog.

Your questions and comments are important to us.